A surge of articles on “middle class” hit my Feedly yesterday. I grew up in a middle class family, without quite knowing what it was. My father made sure I had everything I needed – but that was probably because I didn’t ask for much. I remember asking my Economics teacher back in high school what it meant to be middle class. What I actually wanted was a number – that threshold where you left middle class and entered upper class or upper middle class at least.

Being of any particular class, of course, has nothing to do with being happy. My parents are certainly happier today, in their restricted budget, than they were when they were working and had disposable money. The happiest being in the world is a monk. But to the rest of us, the average beings, the true utility of belonging to any class is completely comparative (and irrelevant). 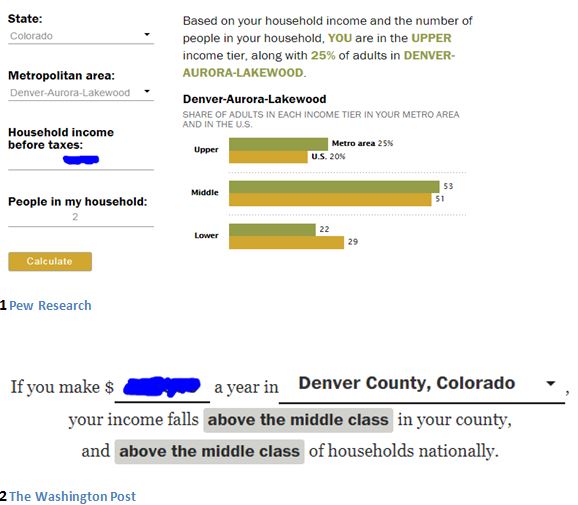 This Washington Post calculator and the Pew Research Center posits my wife and I in the upper income tier.

<Caption: I like them a lot – how quickly flippant, you say>

In reality, we are town home dwellers living among single family ones that cost a half million and more. I don’t feel particularly middle class when my long serving Honda Fit parks next to any of the other cars in the neighborhood. My neighbors include a retired teacher and a registered nurse who is also a single mother of two excitable boys.

I think we’re mixing middle class with middle income. And perhaps why the Pew Research cites “upper income tier” (not middle class) on the article about determining if you’re middle class.

One of my heroes is Ronald Read. For as much as is known about him, I find him refreshing and philosophic in infinite melancholic ways – more on that on later posts.

Anything higher, which I suspect is the bracket most FI seekers fall under, would place you in the “upper income tier”.

Your working salary, though, is short lived and temperamental to the market, the self, and a whole host of external forces. Just about the only way FI works is if our salaries are reinforced with the way we live, our outlook and an honest goal. How long we sustain these determine whether or not we succeed.

There are a few practical things we’ve done (but previously shared by a hundred others). Before I list, please note: We are not hippies. We lean both left and right, to choose the best of all worlds, usually for the best of more than just us.

First off, marry well. Choose wisely – a frugal, employable spouse. My wife and I live on one income. We married in court for $12. I took a half day off. While we’re still not maximizing our 401k, we are saving over 50% of our gross pay – significantly higher than the national savings rate that, depending on the source, hovers anywhere from 5% to 15%.

We don’t do Whole foods, and Trader Joes is awesome.

Choose a degree that pays. If that’s done and not done well, choose a job that pays. I’ve worked with people from all educational background and attainment. If you don’t have the degree, get the experience.

I’d like to say Never Settle. But I’ve sort of settled into a semi-stress free job, where I dream of someday working for Google without the fear of loosing the job.

Save and invest, wisely. For us, the less sophisticated majority and somewhat young, the most potent vehicle are time (start early, start young), maximizing all available tax-advantaged retirement plans, than some more. Our portolio is here, if you’re keen.

Where you live will greatly impact your savings. Our housing expense quadrupled after we moved to CO (from KY). Magnify Money lists ten top places to live for six figure households. Cities in Tennessee loom large (I once interviewed for a small company in Chattanooga – but didn’t get the job). Avoid the usual suspects (SF, DC, Honolulu, and  Boston that make the converse list) – especially if you’re flipping burgers – I’ve never understand why as is evidenced by this and this).

Find alternate sources of income, best if completely passive. I’m trying my luck with this site, but there’s a lot to learn.

In gist: Status is irrelevant, avoid the coasts, save and invest, find passive means, never settle, get that degree (and job), marry well and be humble (in reverse order) – those, my friend, should make you FI.

And finally, just for kicks: a million is more or less what most people aim for (after which they get insecure and postpone). But if you were good with a million, the 4% today places you at: 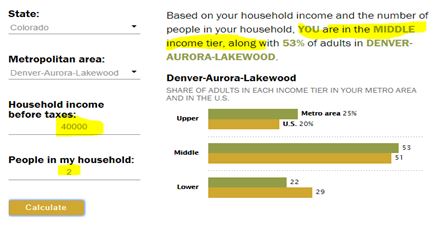 *The title is adopted from this Pew Research article that is a more thorough write up on the middle class.